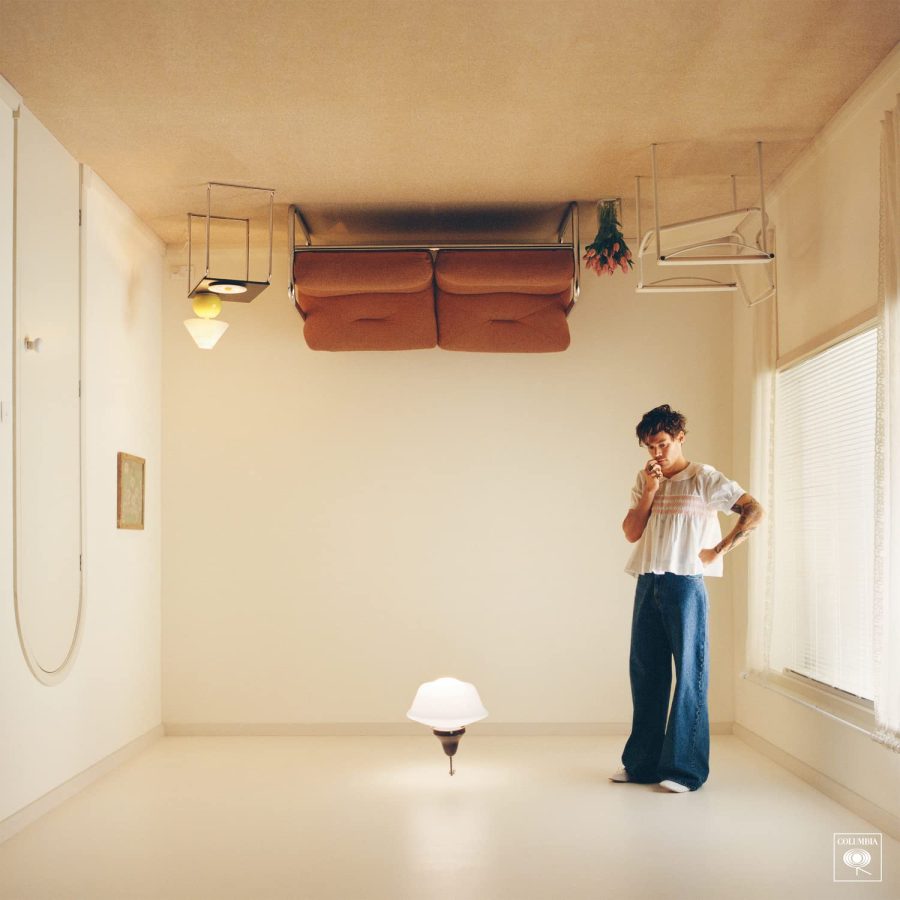 “You know it’s not the same as it was” sings Harry Styles as his brand new album Harry’s House, released on May 20, 2022 and takes over the internet. His new album hit the charts the night it came out and it definitely is not the same as it was. The new sound of his album does not surprise fans as it has a fun and dance-like rhythm to all his songs, except for a select few that are lovey-dovey tear jerkers. This album is just what everyone needed to kick off summer! It is safe to say that this is Harry’s best album yet!

To begin, his album starts off with “Music For a Sushi Restaurant”. The song is exactly what the title says, he was inspired by the music heard at an actual sushi restaurant. This song sets the tone for the rest of the album with its funky bass and techno sound. As the song does refer a lot of foods you would find at a sushi restaurant, the song is also quite intimate as you will hear lyrics like “It’s ’cause I love you, babe / In every kind of way,”, and “Green eyes, fried rice, I could cook an egg on you.” which suggests that whoever he is singing to is hot! His girlfriend, Olivia Wilde, reposted this song on her Instagram story knowing that the song was written for her. This was a great way to start off the album in a fun and fabulous way.

His second song is called “Late Night Talking”. The title is quite self explanatory as he sings about how lovely it is to have those late night talks with someone you admire. Harry sang this song while he was headlining at Coachella in California at the end of April and fans raved about it. The song has a cute and fun beat. Many say that this song is a representation of what the “honeymoon phase” of a relationship is like. When you begin to fall in love with someone, you will do anything for them, including staying up late just to talk to them.

Grapejuice is the third song on the album that starts off with a grungy tone with the guitar opening and Harry whispering, “1,2,3”. Listeners were fooled thinking it was going to be a rockish/grungy song and hear a delightful song about his favorite person and drink. He explains the euphoric experience of leaving everything behind and running away from any problems.

Harry starts the next song with a bit of a surprise. A little girl says, “Come on Harry we want to say goodnight to you!” and then immediately transitions into an upbeat tempo. The fourth song on the album is his leading single, “As It Was” and it explores the feelings of loneliness, reminiscing on the past, and embracing change as one grows older. He covers up these sad lyrics with synths and an upbeat tempo which gives it an 80’s sound.  This song immediately blew up following its release on April 1 and has since stayed #1 on the Billboard 200 charts.

Next is “Daylight”, which has a great sound to it and a sweet message as well. Harry sings about how he feels when his lover isn’t around him. The chorus says “If I was a bluebird, I would fly to you, you be the spoon, dip you in honey so I can be stickin’ to you”, saying that he would go anywhere to be with the person he loves. The meaning of this song is how he hates the “daylight” as it takes away the time he has with his partner.

Harry’s first tear jerker of the album, “Little Freak” speaks about the stomach turning feeling of your significant other leaving after they left a big mark in your life. The feeling of not being loved by the one you love the most is never a good feeling. So, Harry wrote a song about one of his past lovers who truly changed his life and made him see things he never thought. However, he mentions that they never noticed anything about him or his life and how it hurt him.

Harry continues his album with a song that is more on the sad side named, “Matilda”. He wrote this song about a friend of his that was not properly loved by her family, and thought that it was normal. He speaks about her struggles of having to keep them in her life even though it brings pain to her. His chorus says, “You can let it go, you can throw a party full of everyone you know, and not invite your family cause they never showed you love, You don’t have to be sorry for leavin’ and growin’ up, mmm”. He speaks of how it is perfectly fine to leave a toxic environment, even if it involves family. This song definitely brings tears to anyone’s eyes, especially those who struggle with family issues.

The upbeat “Cinema” immediately follows the two saddest songs on the album and has fans wiping their tears away and getting up to dance. Harry always makes sure to write a fun and groovy song that everyone loves, and this song does just that. At his One Night Only concert in New York, he told fans to dance as much as they can and everyone in the arena was going crazy. Harry’s next song, “Daydreaming” is the perfect song for the summer as it opens up with him vocalizing with the upbeat sound of the drums and the bass is the best song to dance to on this album! This song speaks about his excitement of seeing someone he loves after a long time of not seeing each other. His feelings are euphoric and it is like he is living in a daydream being with the person he loves.

“Keep Driving” is about ignoring everything in the world and just having fun with a loved one even when everything is going wrong. It has a smooth and fun beat that is hard not to love.On the surface, it just seems like he is stating random objects in his lyrics, but they actually describe the significant pieces to his relationship and how they are trying to move past all of the crazy things in the world.

One of the popular songs on the album, “Satellite” starts off quite slow as the chorus turns into a fun and upbeat sound for fans to jam out to anytime. However, the meaning of the song is quite upsetting, singing about how he isn’t over his last relationship and still see’s light for them. He sings, “Spinnin’ out, waitin’ for ya to pull me in / I can see you’re lonely down there / Don’t you know that I am right here?”, expressing that he sits there going round and round, as a satellite would, waiting for them to come back.

“Boyfriends” is the second to last song on the album. He starts the song off with a reverse sound of the final line of the song to represent the same thing over and over again while in a relationship. The meaning behind this song is to explain how complicated it is to see through your boyfriend as they aren’t responsive to you. Harry sings, “Boyfriends, Are they just pretending? They don’t tell you where it’s heading, And you know the game’s never ending, You, you lay with him as you stay in the daydream, You feel a fool, You’re back at it again” The never ending cycle of being in a relationship that isn’t going anywhere, but you’re too scared to leave.

In his album teaser, Harry put in a snippet of a piano ballad which had fans creating a bunch of theories as to what song it was for. Turns out, it was the last song on his album, “Love of My Life.” This song is about realizing the true value of something when you have already lost them. He finds all of the happy memories within a relationship and reminisces on what could have been if only he realized what he had while he had it. It is a slow, but powerful song that is the perfect ending to his album.

It took three years for Harry Styles to release this album, and now it is clear why. Each song is beautifully put together and shows the deep meaning of a relationship through lyrics and sound. Whether it’s an upbeat song such as “Music For A Sushi Restaurant,” or a song that you cry to such as “Matilda,” Styles does a great job experimenting with new sounds and branding himself more and more into an established solo artist.

You can stream “Harry’s House” on Apple Music, Spotify, Youtube, or any other streaming service.