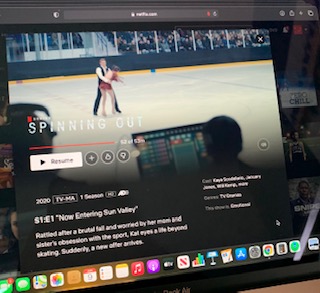 Currently, the one season show, Spinning Out, is out on Netflix. It is a show filled with drama, suspense, and relationships, as it revolves around the main sport of competition ice skating.

Spinning Out is not only interesting to watch because of its array of characters, but also because of its intense ice skating. It is fascinating to observe how they skate, and how drama arises from their fierce competition.

Each character of the show is very involved in ice skating. The show starts as Kat is struggling to succeed in singles skating after a devastating fall that ended in her cracking her head. She then becomes a doubles skater, and the whole show encompasses her growth with her partner, Justin. This is the start of their relationship and their skating career together.

In the show, the main character, Kat, has bipolar depression like her mom. Throughout the show they internally battle whether or not they should take their medicine. Kat contemplates this decision because not taking her medicine improves her performance as a skater, which is incredibly important to every character in the show. When Kat and her mom go off their medicine, they go off on tangents, which becomes dangerous. They start to have episodes, and many problems arise, as they are determined to keep their condition a secret.

Aside from Kat, this show also involves her best friend, Jenn, her sister, Serena, and her skating partner, Justin. Jenn and Kat are incredibly close in the beginning of the show, and are very supportive of each other’s skating. Jenn has a hip injury and is in pain while she is skating, but Kat gives her advice and helps her make the right decisions, until they have a fight when she is off her medication.

Kat’s relationship with Serena has a strong foundation, but it is clear that Serena is struggling living with her mom and Kat fighting. Throughout the show Serena acts mean and aggressive towards Kat, which separates their family. Despite this, the sisters eventually find their way to make up.

It is evident that Spinning Out revolves around Kat’s relationship with every person in her life, how they are not always stable, and how they relate and interfere with her determination and dedication to skating.

Although the show is only one season and was unfortunately canceled, I highly recommend watching it because it is extremely interesting, suspenseful, and there is always a conflict.