What is the Deal With WandaVision? 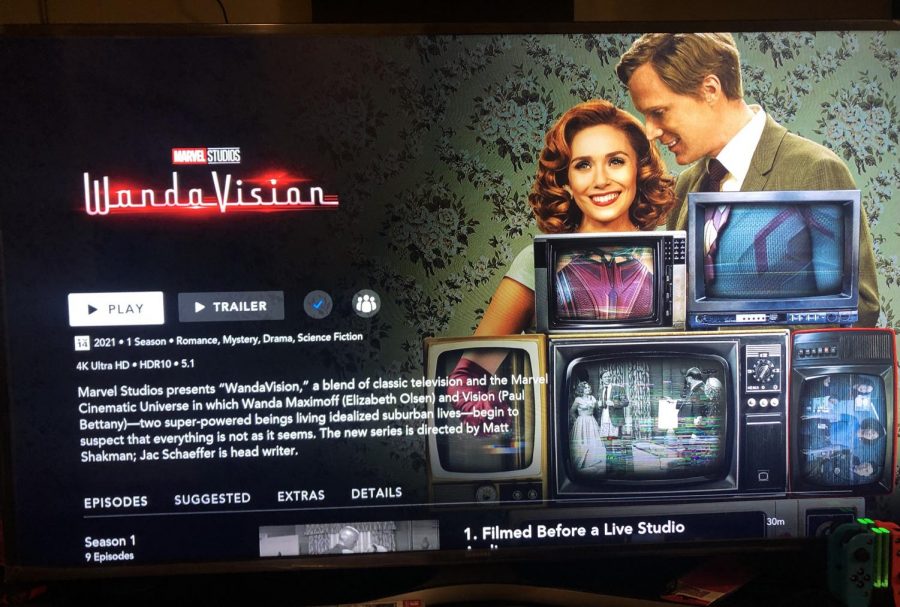 Disney Plus’ recent release of WandaVision grew massive popularity over the course of its weekly episode drop.

WandaVision is a show created by Marvel, consisting of nine episodes, each ranging from thirty to fifty minutes. Each episode was released every Friday until the end of the series. This series finally gave some lesser known heroes attention, focusing on their lives as well as their origin stories. In addition, the show first introduced the idea of a Marvel series that could be streamed on Disney Plus.

WandaVision surrounded the lives of Wanda Maximoff and Vision, who are found stuck in the decades of television. However, neither Wanda nor Vision seem to be aware of this change of scenery, and believe everything is normal. Every episode progresses into a decade of show styles, starting in the 1950s mirroring the Dick van Dyke Show, and ending in the 2000s, using the style of Modern Family. This vague introduction to the show caused massive speculation among the fans on why this was happening.

Disney Plus states, “Marvel Studios presents, ‘WandaVision,’ a blend of classic television and the Marvel Cinematic Universe in which Wanda Maximoff (Elizabeth Olsen) and Vision (Paul Bettany)- two super-powered beings living idealized suburban lives-begin to suspect that everything is not as it seems.”

As the episodes continue, the pace begins to change from the happy lives that Wanda and Vision are shown to have. More into the show, there are more mysterious scenes that are a completely different vibe of the rest of the episodes. Halfway through the series, it is revealed why certain occurrences are happening, as well as what is occuring in the outside world. This creates a drastic shift as to what the series was originally about.

The Critics Consensus on Rotten Tomatoes, states, “Part loving homage to TV history, part off-kilter mystery, WandaVision is a wonderfully weird and strikingly bold step into the small screen for the MCU- and a perfect showcase for Elizabeth Olsen and Paul Bettany.”

The popularity of WandaVision has grown since its release, causing a stir of what is to come in the future. The show gives fans the Marvel content they have been waiting for, since the release of their last two movies, Avengers Endgame and SpiderMan: Far From Home. In addition, WandaVision has excited many people for the next phase in the Marvel Cinematic Universe. It gives insight on where the Marvel world stands as new movies and shows are released in the near future.

Marvel Fan, Desiree Garde-Saunders states, “As a Marvel fan, I was really excited for this show to release because it included some of the characters I knew from the original comics. When watching the show, I liked the main character’s relatiblity and seeing how they dealt with real issues as humans, not heros.”

This show captivated viewers, as every episode ended with a cliffhanger, leaving the viewer excited for the following week’s episode. The main plot of the show is enough to keep the viewer engaged, even if they are not hardcore Marvel fans. In addition, the theming and visuals of each episode was pleasing to look at, as every week represented a new decade. Every episode had a different set, different wardrobe, and even different types of slang spoken by the characters.

Currently, WandaVision is fully released on Disney Plus and can be watched in its entirety. Although the world of WandaVision has come to an end, it has opened new doors for expanding the Marvel Cinematic Universe. For many Marvel fans, it is a key transition into Marvel’s phase four in their plans, as the show’s plot will tie into future shows and movies.